You are here: Home / Archives for Country / Mongolia 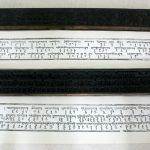 This work is a unique piece of art where texts of Green and White Tara were written in 79 lines in less than 5 cm of space using very thin pen point.

Written in 1651, covers the history of Mongolia and neighbouring countries from the 13th to 17th centuries, including the reach of the Mongol empire across Asia and Europe.