You are here: Home / Archives for MOWCAP 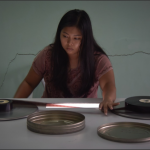 A Memory of the World (M0W) training workshop for film archivists was held in Yangon, Myanmar, on 18-19 October 2017.

The organisers were the “Save Myanmar Film Project”,  a voluntary group associated with the Wathann Film Institute, a local non-government organisation, in collaboration with the Myanmar Ministry of Information and Culture. The Ministry maintains the country’s most important film archive collection, and the venue for the workshop was the Ministry’s head quarters building. The 15 participants came from various backgrounds and included some staff of the Ministry.

The workshop was led by Mick Newham and Ray Edmondson, both of whom have long international careers in audiovisual archiving, are former senior staff of the National Film and Sound Archive of Australia, and former presidents of the regional professional federation SEAPAVAA (South East Asia Pacific Audiovisual Archive Association). In preparation for the workshop, the MoW publication, Audiovisual Archiving: Philosophy and Principles (2016 edition) was translated into Burmese and distributed to all participants.

The group of participants was divided into two: on the first day, Group 1 spent the day with Ray discussing basic archiving concepts and principles, the practicalities of identification, collection management, preservation and access, and disaster preparedness. Group 2 learned about the physical and chemical attributes of film, and had hands-on practice with film winding and splicing. On the second day, the two groups changed places.

The workshop was intended to encourage the growing interest in film preservation among film makers, researchers and archivists, and to help develop a more comprehensive approach to the assembling and protection of the nation’s film heritage. Some follow-up actions were agreed on to help ensure that the experience of the workshop is built upon as the Save Myanmar Film Project and the work of the Ministry develops.

The training was made possible by the generous financial support of the Asia Culture Center through the ongoing partnership with MOWCAP.