You are here: Home / News / Opening of Knowledge Centre at Renmin University, Beijing 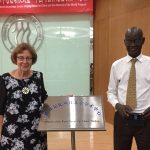 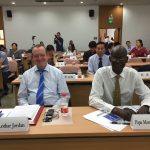 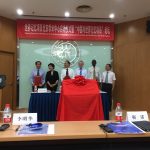 A second Knowledge Centre was opened on 11 July 2017.  It is based in Beijing at the School of Information Resource Management, Renmin University.  A Memorandum of Understanding was signed by Dean Zhang Bin; Professor Nuo Jin, Chairperson of the University Council; Li Minghua, Director General of the State Archives Adminstration of China, chair of MOWCAP and chair of the China MoW Committee; Professor Lothar Jordan chair of SCEaR; Papa Momar Diop, Memory of the World International Advisory Committee; and Zheng Suiquan,Vice- Chairperson of the University Council.

Mr Li Minghua welcomed everyone to the opening.  He spoke about the value of the Memory of the World Programme and noted that China had 10 items inscribed on the Memory of the World Asia and Pacific register.  Professor Nuo Jin spoke about the importance of the Knowledge Centre to Renmin University and the importance of the work done by UNESCO to encourage institutions and citizens to preserve national memories.

Professor Jordan covered the role that the Knowledge Centre would play to build bridges between the academic world and libraries, archives and museums.  He also noted that functions of the Knowledge Centre included the collection of material on Memory of the World and the organisation of events such as exhibitions, seminars, talks and outreach activities.  He also said the Centre would provide a solid basis for exploring synergies with the UNESCO World Cultural Heritage and Intangible Cultural Heritage Programmes.

After unveiling the nameplate for the Knowledge Centre there was a forum on China and the Memory of the World.  Topics covered in the presentations included the Beijing Memory website, the Ming and Qing dynasty archives and their importance for understanding Chinese history.  Speakers from China also covered the importance of the Qiaopi Archives (correspondence and remittance documents from overseas) and the Suzhou Silk Archives and the work being done to manage and promote these two collections.  The significance of both of these collections is demonstrated by their inscription on the Asia Pacific register.  The Qiaopi documentary heritage is also inscribed on the international register.

Overseas guest speakers talked about Memory of the World in Western Africa, the impact of MOWCAP in Asia and the Pacific and the documentary heritage cared for in Central Asian archives that could facilitate research on the links between Central Asia, Russia and China in the 19th century.

In summary, Dean Zhang Bin noted that the School of Archives at Renmin University has the infrastructure to progress research on Memory of the World.  It has strong links with international organisations and the resources to collaborate with them.