You are here: Home / Archives for Country / Malaysia 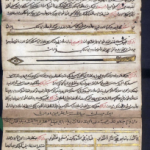 The manuscript was written in 1863 and presented by Ismail to “AlMarhum Mangkat di Pahang” who, later owned the original manuscript. The manuscript shows that the earliest weaponry technology came from the Portuguese in the early 16th century. The Portuguese introduced the technology for the production and manufacture of ‘matchlock’, an early type of firearm, which resulted in its wide use in the Malay
Peninsula. It also provides evidence of how the Islamic world contributed to the development of science and technology in the Malay world.

The ways that Malays used firearms are documented and include the application of both technical and mystical elements such as Sufism. For example, the basics of shooting and aiming. They also include mathematical elements such as for the measurement of ammunition and the use of rituals and mantras.

The manuscript consists of eight pages folded in the form of an accordion and is written on cream European laid paper in Jawi script. Such folds are rare in Malay manuscripts. The cover is made of leather and illustrated in gold ink in the arabesque Malay style. It also has a watermark of a man’s face on a crescent moon.