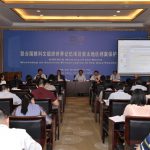 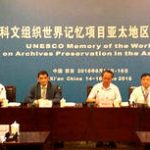 More than 50 participants from Australia, Cambodia, China, Czech Republic, India, Thailand, Turkey, Republic of Korea and Mongolia attended the workshop. At the opening session, Mr Li Minghua, Director-General of SAAC and Chairman of MOWCAP, presented the purpose of the gathering and expressed his hope that it would contribute to implementing the objectives of UNESCO’s Memory of the World Programme to facilitate the effective preservation, by the most appropriate techniques, of the world’s invaluable documentary heritage, and also to increase awareness and protection by achieving its universal and permanent accessibility.

The regional workshop was opened on behalf of UNESCO by Dr Boyan Radoykov, from the Knowledge Societies Division, Communication and Information Sector, who warmly thanked the organizers for the timely initiative and for their substantial contribution to this flagship Programme of UNESCO, and underscored the importance of such regional events for sharing successful experiences in access and preservation policies and practices and for strengthening cooperation and mutual understanding in the framework of MOW.

Dr Radoykov then made a detailed presentation of the Memory of the World Programme, followed by Dr Ray Edmondson, from Australia, who introduced the recently adopted normative instrument, Safeguarding the Memory of the World – UNESCO Recommendation Concerning the Preservation of, and Access to Documentary Heritage, including in Digital Form.

Also spoke during the first day Dr Li Yuhu, Director of the Ministry of Education’s Engineering Center for Historical and Cultural Heritage Conservation and Director of Shaanxi Institute of Historical and Cultural Heritage Conservation, who shared with the participants his key inventions on restoring and protecting deteriorated writings, on the reinforcement of vulnerable original appearance in archives and ancient documents, on photographic image repair technology and mass de-acidification, as well as on the long-term preservation of archives and books. These innovative technologies have won him 50 Chinese national patents, as well as a national patent in the USA, and are considered as leading innovations by international experts and specialists.

UNESCO launched the Memory of the World Programme in 1992 to guard against collective amnesia calling upon the preservation of the valuable archive holdings and library collections all over the world ensuring their wide dissemination. The Programme is intended to protect documentary heritage, and helps networks of experts to exchange information and raise resources for preservation of, and access to, documentary material.”